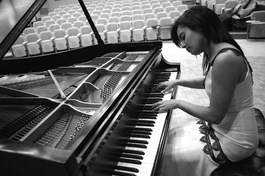 Irene Gregorio enjoys a diverse and active musical life as a pianist, chamber musician, vocal coach and music director in Los Angeles. Originally from Guelph, Canada, she received her musical training at the University of Western Ontario with Ronald Turini, one of Vladimir Horowitz’s few pupils; at the University of Michigan, where she was a fellowship student of Martin Katz and most recently completed her DMA at the University of Southern California.  As a pianist and chamber musician, Dr. Gregorio has collaborated in recital with members of the LA Phil and San Francisco Symphonies, and has served as principal keyboardist/percussionist with the National Youth Orchestra of Canada and the Mendocino Music Festival Orchestra. Her performances as a collaborative pianist have taken her throughout North America, Europe, Cuba, and the Philippines, and she has also appeared on PBS, CBC Radio 2, and on numerous film soundtracks in the LA area.

Her passion for art song and lieder led her to a fellowship at the Franz Schubert Institute in Baden-bei-Wien, Austria in 2010, immersed in the study of poetry, drama and performance of German lieder alongside top-tier singers from around the world, under the mentorship of Rudolf Jansen, Julius Drake, Helmut Deutsch, as well as world-class singers Elly Ameling, Wolfram Rieger, Wolfgang Holzmair and Barbara Bonney.  She has also accompanied opera masterclasses of such artists as Justino Diaz, Sherrill Milnes, Cesar Ulloa, and Joan Dornemann, and worked as an apprentice pianist at the International Institute of Vocal Arts in Chiari, Italy and San Juan, Puerto Rico, and at the American Institute of Musical Studies in Graz, Austria.  Equally at home as a choral accompanist, she fully enjoys the experience of musical community in such groups as the Los Angeles Children’s Chorus, Gay Men’s Chorus of Los Angeles,Pasadena Master Chorale, Hollywood Master Chorale, and the University of Southern California Chamber Singers.  While at USC, she was fortunate to work with such musical figures as Jo-Michael Scheibe, Eric Whitacre, Morton Lauridsen, and Helmut Rilling.  She has served as associate music director at Unitarian Universalist Church of Santa Monica and Trinity Lutheran Church in Pasadena, CA.

As an educator, Dr. Gregorio has nearly 10 years of working in the university academic setting.  She served as a full-time Lecturer of Collaborative Piano in the music department of the California State University, East Bay in 2002, and enjoyed a fulfilling experience in the university community, also serving as the artistic director of Musica delle Donne, an annual festival which celebrates music by women composers, associate director of university’s Centre for Filipino Studies and as the university’s Faculty-in-Residence. She also spent two years as accompanist and assistant music director at Beverly Hills High School.  Her articles have been published by Choral Canada and she is currently researching the Filipino art song form, the Kundiman, and plans to publish a performing edition of these works.

Dr. Gregorio currently serves as staff accompanist at Cal State LA, teaching artist/pianist for the LA Opera and works as a pianist for the Los Angeles Children’s Chorus.  She enjoys playing in the Symbiosis Chamber Ensemble and also works with the non-profit group, Street Symphony, an organization of musicians that bring top-tier musical performances to homeless and incarcerated groups in the LA area.  She is married to percussionist Nicholas Stoup and they have a son, Kali José and are expecting a baby girl in July 2015.

A documentary about sommeliers, directed by Jason Wise, score composed by Brian Carmody

"A Wilderness in your Heart". Directed by Robin Dunn